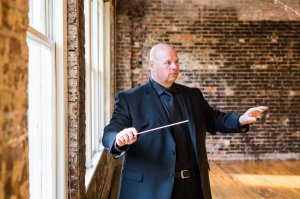 Currently working as a freelance musician in central North Carolina, Tony can be seen performing as a substitute and extra with the North Carolina Symphony, Chamber Orchestra of the Triangle, Wilmington Symphony and Roanoke Symphony.  Tony performs in the orchestras for the Carolina Ballet and NC Opera, and is a founding member of the Boylan Brass.

In addition to this, Tony maintains a private studio of high school and middle school students, and regularly runs sectionals for school bands.  Tony is an adjudicator for marching bands and teaches brass techniques for several local and visible programs in NC.  Tony is also the Brass Supervisor for Carolina Gold Drum and Bugle Corps.

As a soloist, he has made appearances with college bands, high schools bands, all-county bands, gave a solo recital at the North Carolina Governors School Summer Program at Meredith College, was a featured artist at the 2002 International Tuba Euphonium Conference, performing the Gregson Tuba Concerto with the Triangle Brass Band, and was a guest soloist with the Triangle Wind Ensemble at the 2005 North Carolina Music Educators Convention.  Other solo appearances include the St. Francis Brass Band, Tar River Symphonic Band, Advocate Brass Band and the Greensboro Concert Band.

Tony attended the University of Kentucky, and has studied at the University of North Carolina at Greensboro and Towson State in Maryland. While a student in Kentucky, he was first runner up in the UK Concerto Competition in 1997, and Principal Tuba in the Wind Ensemble and Orchestra.  He played solo E-flat tuba with the Lexington Brass Band and was featured with the Bass section of that band several times, including the LBB compact disc release Images. Tony also played with the Advocate-Messenger Brass Band in Danville, KY, appearing on three compact discs and making a solo appearance. Tony was also a driving force in the Four Horsemen Tuba Quartet, the resident student tuba quartet at the University of Kentucky. The FHTQ was the busiest performing ensemble at UK during this time, making an appearance at the 1998 Great American Brass Band Festival, and winning the Adult Ensemble competition at the 1998 NABBA competition.

Tony would like to thank the many musicians and teachers that influenced him over the years, including his principal teachers Marty Erickson, Mark Norman, Dave Lewis, Ed Goldstein, Matt Good and Skip Gray, for these are the people who have helped in his evolution as a tuba player and musician.